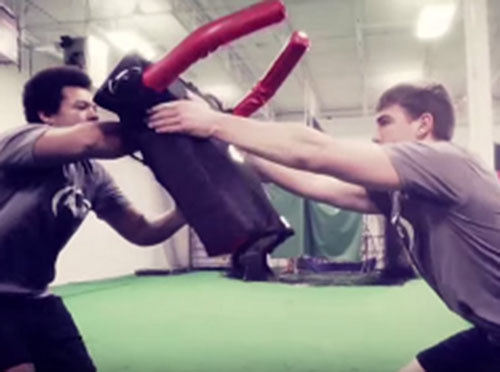 Adopting a zone blocking scheme can be a challenging transition for even professional offensive line units. The idea of blocking an area as opposed to a man can be difficult to execute. Your linemen need to be aware of multiple defenders and their movements. Which defenders are attacking which gaps? How long should a tackle or guard commit to a chip block before moving downhill to the next level? These are decisions often made on the fly and can’t be done successfully without complete commitment.

The last thing a pulling offensive lineman needs is sloppy technique and footwork limiting his ability to execute, distracting him from important assignment decisions. Zone blocking is too complex to be hung up worrying about proper technique. Enter The Colt football blocking pad.

Coaches use The Colt blocking dummy to train lineman on proper pad level and hand placement in zone blocking drills, such as the 2 on 2 blocking drill on display in the video below. A pulling guard or tackle must place an initial block on the outside half of the nose tackle, then disengage, put on the jets and make a full drive block on an attacking linebacker. Timing the release on the initial block is the key to the proper execution of the zone blocking system.

For an example of the 2 on 2 zone blocking drill in action, watch the video on the left. For other offensive line drills:

Retractable arms make The Colt football blocking pad a realistic alternative to going full contact with another player. Part of the offensive line drill is accelerating to the next level in a controlled way and laying a clean, quality block on a backer, getting beneath the breastplate and inside the arms to drive him back. X’s on The Colt Pro give players a clear look at where to place their hands while drilling blocking technique.

Once offensive linemen learn the right muscle memory in blocking on the move in the open field, there is more capacity to communicate with teammates and decipher defensive schemes. The Colt establishes the fundamentals so linemen can progress to advanced blocking techniques and win more individual matchups. 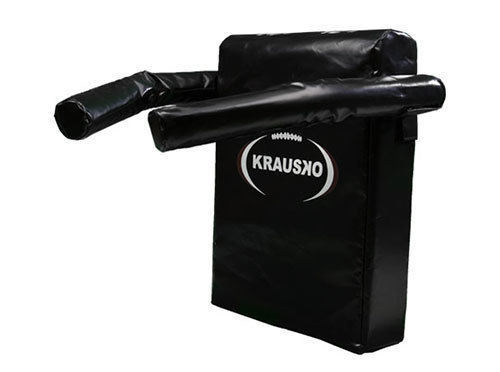 The Youth Colt youth practice shield is particularly useful for younger teams looking to use a zone blocking scheme. Coaches have their kids perform 2 on 2 drills in zone blocking, teaching them advanced skills while continuing to stress the fundamentals of pad level and hand positioning. In the modern game, there is a major emphasis on developing safe, repeatable techniques at youth levels to limit injuries at upper levels.

The Krausko training program allows your youth team to practice at full speed and fully replicate the game environment. Some coaches may hold back on practice intensity with young players, but it’s crucial they know how to orient their bodies and make confident, safe physical movements at full speed. Uncertainty and unfamiliarity breed serious injury on the football field. The Youth Colt blocking pads allow youngsters to practice with no pads at full speed, limiting the risk of injury in practice and in the real game.

The better job coaches do instilling the proper muscle memory by focusing on fundamentals, the more time there is to expand on complex zone blocking systems for young offensive linemen. Utilize Krausko blocking pads in your Pee Wee or Junior Leagues and watch your kids develop into safe, effective run and pass blockers.

Contact the zone blocking experts at Krausko for more details on our revolutionary football training equipment.